Home
Not Recommended
What is Crowd Rising? – Another Cash Gifting Scam?

When you land on the CrowdRising.net home page you get the impression you will be giving money to help people. This, of course, is far from the reality.

Most people join this scheme to make money, giving is just part of the process. You must give before you can receive.

In my crowdrising.net review, we’ll see if this is something to you should consider or if it’s another cash gifting scam.

Product: Crowd Rising
Overall Ranking: 20 out of 100 or 1/5 stars
Price: $20 to become an active member
Owner: Gerhard Rempel + 4 others who are unknown
Websites: crowdrising.net, crowdrising.eu

Who is behind Crowd Rising?

The CrowdRising.net domain was registered on the 26th of March 2016, with Gerhard Rempel listed as the owner. For CrowdRising.eu the details have been kept hidden.

Gerhard Rempel was apparently the co-owner of Belizers, which was a Ponzi scheme. Investors were encouraged to invest on promises of a 150% ROI.

Rempel was also the owner of Fast Perpetual Cash Cyclone another little known and short lived Ponzi scheme that was started in 2015.

The Crowd Rising site states that the company is not owned by any individual but was created by 5 founding members, who are referred to as the “5 Horsemen”.

Hmm, can you have confidence in a company that doesn’t clearly state who the owners are? In addition, when the one known owner has a record of failed schemes this clearly doesn’t instill confidence.

What is Crowd Rising?

Crowd Rising is a similar type of scheme to MMM Global. If you’re not familiar with MMM Global, it’s a scheme where you make a donation to someone and you receive more in return.

The scheme will only survive as long as there are new funds and new members coming into the system. These new funds pay the existing members so this is clearly a pyramid scheme.

As a member, you will have to sign up new recruits. When there are not enough new recruits to pay existing members the program will collapse. The video below explains how it works. 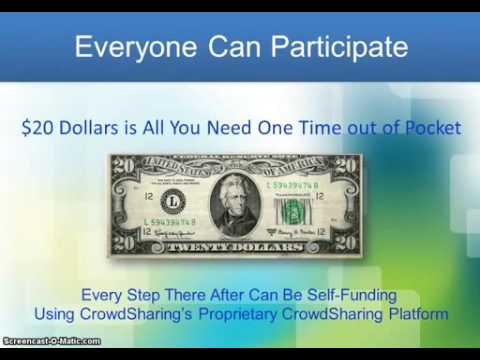 Who Is This For?

This program can’t really be recommended for anyone. However, it seems to have the most success with the people who are desperate and who have little hope of earning money any other way.

According to Alexa most visitors (70%) come from Nigeria with the rest coming from the US and Europe.

These types of programs always seem to have success in Nigeria due to the economic recession there. People are willing to try and earn some extra money any way they can. When some publicize their success with schemes like Crowd Rising this attracts new members.

The authorities in Nigeria seem to let these schemes continue at the moment but if you are in the US or Europe, Ponzi schemes, pyramid schemes or cash gifting schemes are illegal.

Of course, Crowd Rising tries to reassure you by saying:

But giving a member of your family a $20 bill is a lot different to giving someone you don’t know $20 in the hope of receiving $100 in return.

This is a cash gifting pyramid scheme, you recruit members and get paid, there are no services or products.

Then to become an active member you have to donate $20 to your sponsor. Once your sponsor has approved your donation you are on level 1.

On Level 1 you recruit 5 people, they will each pay you $20. You then move up to level 2 which will cost you $40. This is paid to the person who invited your sponsor.

Your 5 referrals then each sign up 5 new members. These new members then pay their sponsor’s $20 and they then pay you $40 if they want to progress to level 2. Which means you get 25 x $40=$1000. This continues right up to level 10 but with the higher levels, the numbers start to get a little ridiculous, as you can see below.

The payments are sent directly from one person to another by the payment processor they have chosen, so there can’t be any refunds.

To be successful you will need to recruit many new members which will not be easy.

There are no fees so the owners are undoubtedly placed at the top of the matrix to recuperate the largest share of funds deposited into the scheme.

You may think – heck it’s only $20 why not give it a try. That’s true but to get anywhere in this scheme you will then have to recruit other people into Crowd Rising.

You could just place a few Facebook ads and enroll some members without telling them the dangers and risks of joining this program. Your referrals may even end up making some money.

On the other hand, Crowd Rising may stop operating tomorrow and they could lose their money. Most people who sign up for programs like this will be desperate and won’t be able to afford to lose $20.

Be ethical, warn people of the dangers, tell them it may be illegal and advise then to only invest an amount they can afford to lose.

Crowd Rising will cease to function when there are not enough new recruits, perhaps tomorrow, perhaps in a year. The only thing that’s certain is it’s unsustainable and one day it will crumble.

Now you know the risks of joining Crowd Rising, you can make your own decision. I don’t recommend joining this scheme. If you do join, only invest money you can afford to lose and you will know who to blame if things go wrong.

To be successful, you will have to recruit many new members, which will take time and possibly money. And then once you have recruited lots of new recruits they will have to carry on recruiting. This will only work if there are always new members coming in and that is impossible!

Even if you do make some money, this will only be temporary. If you are in Europe or the US remember that this type of scheme is illegal.

It’s nice to dream of making money without putting in any effort but this isn’t possible. To earn money online you have to work hard and learn how to do it correctly.

If you’ve had enough of these dodgy schemes, I suggest that you try creating your own business that’s completely legit. Check out my #1 rated program where they will teach you how. It’s where I learned how to build this site.

Had Enough Of The Pyramid and Ponzi Schemes

Learn How To Build Your Own Legitimate Online Business

Thanks for reading my CrowdRising.net review and let me know if you’ve tried any cash gifting schemes in the comments below.

Price: $20 to become an active member
Owners: Gerhard Rempel + 4 others who are unknown “The 5 Horsemen”
Website: http://crowdrising.net/
My opinion: A mutual help scheme, you recruit new members who in turn pay existing members.
A pyramid scheme that probably won’t last long!
If you do invest only invest money you can afford to lose.
Not recommended.

This website uses cookies to improve your experience while you navigate through the website. Out of these, the cookies that are categorized as necessary are stored on your browser as they are essential for the working of basic functionalities of the website. We also use third-party cookies that help us analyze and understand how you use this website. These cookies will be stored in your browser only with your consent. You also have the option to opt-out of these cookies. But opting out of some of these cookies may affect your browsing experience.
Necessary Always Enabled
Necessary cookies are absolutely essential for the website to function properly. This category only includes cookies that ensures basic functionalities and security features of the website. These cookies do not store any personal information.
Non-necessary
Any cookies that may not be particularly necessary for the website to function and is used specifically to collect user personal data via analytics, ads, other embedded contents are termed as non-necessary cookies. It is mandatory to procure user consent prior to running these cookies on your website.
SAVE & ACCEPT