Home
Not Recommended
What Is Facebook Bonanza? Too Good To Be True or Legit?

You’ve probably come across Facebook Bonanza and think it could be a great opportunity to make some good money online.

At first glance, it looks alright. They seem to have some connection with Facebook and it looks like they have been mentioned on CNN.

Unfortunately, you can’t rely on either of these points. As you go through the review you will see there are many other warning signs. So a good job you carried out your research before giving your credit card details!

I always like to start a review by finding out who is behind a program. It’s useful to see what sort of reputation the people who own the program may have and to see if they’re associated with any other scams.

In this case, it’s not made clear who the owners are which is a bad sign. After a little digging, it seems the site is owned by Markenark Holdings. A company based in Cyprus that has several other low-quality sites that promise you can earn lots of money but don’t tell you how.

Being located in Cyprus perhaps explains why they are still allowed to use the name of Facebook. It will certainly be much more complicated for Facebook to take action against a company in another jurisdiction.

Although they use the name Facebook in the name of the program, this has absolutely nothing to do with Facebook. The Facebook Bonanza video would have you believe Facebook launched the program after a meeting with Mark Zuckerberg and Bill Gates.

The two met to discuss economic stimulation and the result was Facebook Cash Kit which includes everything you need to get started. Mark Zuckerberg has supposedly invested heavily in the program.

The only problem is that Zuckerberg and Gates have nothing to do with the program. The whole dreamed up story is just to make FB Bonanza look legitimate.

This program has been around for a while so I am surprised Facebook allow them to continue to use their name, although this could be because the parent company is based in Cyprus.

Who Is This For?

In theory, this could be for anyone wanting to earn money online. There are just a few simple requirements as you can see below:

But from what we have already seen and other red flags that you will discover later in the review you are not advised to join this program.

What Will You Be Doing?

As with so many scams, after reading the sales pages or watching the video you’re left wondering what you will be doing. You are just given a few vague clues. For example, if you know how to post on Facebook or like a post then the training will take you through everything else you need to know.

What you are told is that you can make anything from $397 a day to $14000 per month. It’s easy to create hype, creating a business that will pay these amounts is another story.

The disclaimer at the bottom of the sales page, says the program will teach you how to use the recommended products. It’s an educational program and as such creating your money making business will take time. The promise of “start making money today” is complete nonsense.

You may get a few videos on affiliate marketing but certainly, not enough to get you earning. You also run the risk of being contacted by one of their “online coaches” or should I say, salesmen, who will try to sell you more training.

Affiliate marketing is a legitimate way of earning money online but it takes time to build an income. For a real training program check out this review.

I came across Facebook Bonanza (FBB) via a link to an “advertorial“. Let’s look at some of the red flags that appear in the advertorial and on the FBB sales page. Many are very common and are seen in multiple scam sites on the internet.

1. The advertorial photo has been changed to include “facebook work from home”

The original photo was taken when Zuckerberg opened trading the day after the Facebook IPO in 2012.

2. The much-used “work from home opportunities have been featured on ABC, Forbes, CBS, Fox news …”

They also include “ads seen on”

These logos are used to build trust. Work from home opportunities may have been featured on some well-known sites but not Facebook Bonanza.

This video is used on many dodgy sites and doesn’t promote FBB but work at home opportunities in general. Again they’re hoping you will consider the program more trustworthy if it’s associated with some well-known name such as CNN.

Another tactic often used by the scammers. FBB uses messages suggesting there is a limit on places available, you have a time limit to sign up and even a certain amont of time to pay.

Of course, the program will never refuse you because you took too long to sign up or give your credit card details. They will accept everyone and if you come back another day you will see exactly the number of positions available.

Most make money online programs use this tactic and FBB goes through the same process. The checks or earnings they show are very easy to falsify or they may even be genuine earnings but they could come from anywhere.

You don’t know if the earnings are a result of Facebook Bonanza or a different program. So, never be influenced by earning proofs when you see them on make money online programs.

FBB don’t go to much trouble trying to hide the fact that the testimonials may be false. The photos are stock photos that you find on many sites, this underhand method is so common on sites in the make money online niche it’s hardly worth mentioning.

Additionally, they have a disclaimer saying that the stated earnings aren’t verified, which means anyone is free to state they have earned money with this program. These testimonials aren’t worth the paper they are printed on!

Yet again more deception here.  You think you are paying just $4.97 but that is just for the 3-day trial. If you don’t cancel they will charge you $89.97 every month. This appears in small print, I wonder how many would sign up if it was made clear about the recurring charges.

In addition, you also get a 10-day free trial with another program Success Road Academy. At the end of the trial period, if you don’t cancel you will receive a charge of $1 per month.

This is a crazy price for Facebook Bonanza that certainly isn’t justified by the training! If it was a one off payment it is still too expensive. Bear in mind top notch up to date training with all the tools you need will only cost $49 per month and you get a free trial.

Both these programs offer a 90-day money back guarantee. Often these guarantees aren’t worth much and often you will have to fight to recuperate your money. Furthermore, you may need to cancel your credit card to stop any future charges.

Lot’s of hassle that’s easy to avoid by not signing up to Facebook Bonanza!

What Happens When You Give Them Your Email Address?

I’m not willing to give these people my credit card details but I did sign up to see if I was eligible for the program and of course I was. I don’t think they really refuse anyone!

Since then, I receive about 4 emails a day promoting other online scams. Of course, this is no surprise, in their privacy policy, they clearly mention that they will use your email address for marketing purposes.

If you don’t want to get spammed don’t give them your email address!

After seeing the sales page I wasn’t prepared to buy Facebook Bonanza. Giving your credit card data could end with you having to cancel your card to stop them taking your money.

A program that doesn’t tell you clearly what you will be doing to earn money should always be avoided. Apparently, you will get some training but for the price, they are charging you should get a lot more than just poor training!

If you’ve had any experience with Facebook Bonanza or have any questions let me know in the comments section below. 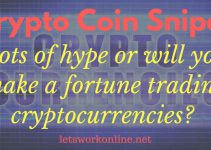